A pioneer in his field he produced one of the earliest arcade games: Demolition Derby. His work on the interchangeable cartridge games provided many game developers with a successful route to market, and ensuring a lasting business model.

Garrett Morgan
Garrett Augustus Morgan (1877 – 1963) patented the invention for the first traffic lights and the gas mask, respectively. The gas mask was one of the key technologies used by troops during World War 1.

Garrett Morgan was born the son of ex-slaves on March 4, 1877. He grew up working on the family farm in Kentucky along with his siblings. Morgan’s schooling did not go beyond the elementary stage. During his teenage years Morgan moved to Cincinnatti Ohio to make it on his own. He contracted a private tutor to help him with English grammar. By 1895 Morgan was living in Cleveland, also in Ohio. There he worked as a sewing machine repair man. He excelled in this profession to the extent whereby a number of Cleveland based manufacturing companies sought his services. By 1907 Morgan had branched out on his own. He opened a sewing machine repair shop. Several years later Morgan opened a tailors and employed 32 individuals. By 1920 Morgan had diversified into the media industry. He published a newspaper titled the Cleveland Call. 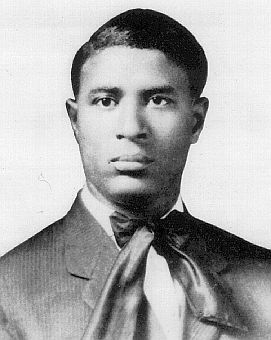 Businessman and inventor Garrett Morgan prospered and was able to secure his own home and means of transport. It was whilst driving in Cleveland that Morgan came up with the idea of a traffic signalling machine. Morgan’s traffic signal had the immediate effect of improving street safety and reducing motor vehicle accidents. His invention saved many lives in the USA. The traffic signal became universal and exists in almost every country in the world today. The first ever traffic lights in Britain were placed on Princess Street in Wolverhampton towards the end of the 1920s. The Wolverhampton traffic lights was a four faced set of lights. They were operated manually by a policeman. Garrett Morgan was not the first inventor to have developed traffic lights, but he was the first to patent the invention. On November 20, 1923 the patent for Morgan’s traffic lights was granted. Morgan later sold his invention to the General Electric Corporation for $40,000.00.

Garrett Morgan’s contribution to war technology came with his invention of the gas mask. On July 25, 1916 Morgan rescued a number of men trapped by an explosion under Lake Erie. He wore his gas masked during the rescue mission and as a result the event made the national headlines. The US Army modified Morgan’s gas mask for use in World War 1. Garrett A. Morgan died on August 27, 1963, at the age of 86.